Born in Bayonne, from a French mother and a Malaysian father from Tamoul origin (Sri-Lanka), Céline started dancing at the age of 5. She went on being trained in ballet dancing at the National Conservatory of the Nantes Region (CNR), with Marie-Elisabeth Demaille, Béatrice Herbout and Bernard Lhuillier as teachers.

Following her first years of training in ballet dancing, Céline was admitted to the Music and Dance Superior National Conservatory  (CNSMDP ) in Paris, to get trained in contemporary dancing.

After these training years in ballet and contemporary dancing, Céline chose to develop the asian side of her origins by getting trained in Bharata-Natyam (a classical dance from the South of India) with Nirupama Nityanandan and Shobana Balachandra as teachers, then by experimenting Kathakali (danced theatre from the South of India) with Haridasan Kalamandalam,  in France and in India.

Since 1998, Céline has taken part in a lot of professional projects as a dancer. From the beginning, she met some outstanding persons who led her to experiment and deepen new techniques and disciplines. In 2000, she met the contemporary-flamenco Eva Luna Company with which she got her first training in Flamenco for 6 creations between 2000 and 2014.

In 2001, she met the director Lionel Briand who gave her her first part as an actress with the role of Juliet in Shakespeare’s « Romeo and Juliet », by the side of Shahrokh Moshkin-Ghalam as Romeo. She went on dancing with Shahrokh in dance performances of Persian culture. In 2006, Céline started to work intensively in partnership with Frédérique Flanagan within the company  Minoskropic-Les 3 Coups, producing shows for baby children, and became fascinated by this very particular  audience. She has been regularly working with the companies Minuit44, Eva Luna, Nakissa et MinosKropic, and she has also worked with the companies Prana, L’Essieu des Mondes, Tendanse, Les Sézaphins, La Muneca, Lips, Kahéna, Jasmina Prolic, Les Oiseaux, La Tour de Babel, d’Ici et d’Ailleurs, Thresh, the classic guitarist Francis Verba, the violonist Guillaume Blanc, the violonist Didier Lockwood….

On the other hand, Céline danced in different short films for television such as L’Aube for France5 and Les Amants d’un jour for Arte (with a choreography by Anne- Marie Reynaud ). She contributed to Arte, worked with Patrick Le Doaré, and Enzo Ioro playing in video dancing and playing the part of Asia Bibi in a documentary film produced by Marie Viloin (Le jour du Seigneur production)

When she was first engaged, Céline was often asked to invent her danced pieces and thus, she soon  had to cope with choreographic work. While she enjoyed her work as a dance performer, she also began to get a liking for choreographic work and started to create her own shows.

From 2002 onwards, she has  been  creating her first choreographic pieces with her own company: in 2009, she created the duet  CPK-30ans, which signed her meeting with the violonist and composer Guillaume Blanc and started her thinking about a link between western and indian cultures, as well as about a dialogue between contemporary and indian dances. In 2011, she went on collaborating with Guillaume Blanc and it was the beginning of a dance/music performing work in strange places with the performance Des Corps Accordés.

Since 2012, Céline’s research work has been concerned with creating a new choreographic language born of the merging of contemporary dance and Bharata-Natyam : the Bharatemporain. She conceived her project Hybride out of this research ; it is now being shown round France and India. This project consists of three artistic products : a choreographic solo, a danced talk and an exhibition.

Outside her own company, Céline is also a choreographer for other companies or structures. 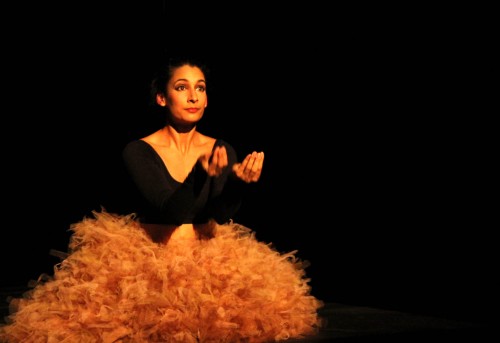